Awesome tips for your holiday party 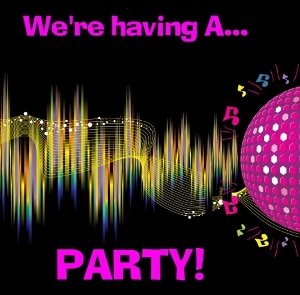 It is that time of year when we start thinking about our Christmas and celebratory parties. Each year I find it gets more busy and the smart individuals know that venues and entertainment will be a prime commodity  in the coming months. As a matter of fact, I already have a number of December events booked by the middle of August.

As a DJ, I do notice the hum drum celebrations that could be turned around if a little more effort were put into them. Maybe it is the times but people are just not as big dancers as they used to be. I just read an article where most new music has slowed down the tempo considerably so maybe there is something to that. However, turning a mediocre celebration into a fun celebration for all is really not that hard. If you are one of those who really want to take things up a few notches for this year’s holiday celebrations, or for any type of party, read on!

If you are putting together a holiday party, don’t be afraid to suggest a theme other than Christmas for the party. It could be an 80’s / 90s theme, an MTV award show theme, Hawaiian theme, etc. Get suggestions from other members of the company or friends and have them even making, or going to the dollar store, to buy props or decorations, This will delegate some of the work and make it easier on you. This will also make the event even more exciting when your coworkers or friends are engaged in helping with the party. Try to get a buzz going about the party.

And don’t forget about the power of games. Guests often need to have some sort of direction at the party. A number of carefully chosen games can be used to build excitement and not to mention, many fun stories to be told later on. Make sure you have enough games to keep guests busy and that the games are not too easy to win. I have had a number of events where a group won the game in 60 seconds. It is best to make them challenging enough so it builds that competitive spirit. An ice breaker such as a scavenger hunt in teams encourages the guests to work together, and will help some of the more shy people fit in. You can even use games to choose which table goes to the buffet first.

You can either run the games yourself with the help of some other volunteers, designate a more outgoing coworker or friend as MC and have them do it… or have your DJ officiate the games. I recommend having one of your guests do it so that the DJ can play background game music while the game is taking place. It is another way to keep people engaged in the party.  Make sure they have a script which they can write, what order the games will be played, know how the game is played so they can explain it and have prizes on hand. Prizes could include funny prizes from the dollar store, fake plastic trophies, or you could use them to choose who wins the Christmas prizes on the table if you have them. Sure beats raffle tickets. Here is an awesome site for game ideas.  Games

A lot of  people overlook Karaoke as another option for their party. Yes, karaoke can be irritating if not planned properly but it can also be a lot of fun when effort is put in to do it right and integrate it into the party. You can incorporate the karaoke into your theme. For example, if you are having an 80s or 90s theme, get the guests to prepare a song beforehand complete with costuming and dance moves. If some are shy, get them to form groups and perform as  The Spice Girls or The Backstreet Boys, etc. This can be a lot of fun as even if the singing is not so great, the entertainment factor can be off the charts. If you really want to raise the bar, have the head of the company, supervisors or some grandparents do something as a group. This can really build company, and even family, cohesiveness.

You don’t sing you say? Do it as a lip sync battle! Jerry Fallon has brought back the art of lip syncing. This is such a fun activity also with the added feature that you don’t actually have to sing so you can concentrate on the performance and really hamming it up. This also is even more fun when done in costume. Check theses links out for an example of a lip sync  Lip sync no costume,  Lip sync with costume.

If that does not appeal to you or your guests, how about a dance off?  This can be an awesome event! Here again costuming can be optional but I think it is a lot more entertaining when you go all in with the costuming. Wither it be a disco dance off  or a hip hop extravaganza, it is a great way to lead into the actual dance time of the party or to have performances throughout the evening. Check this link out for one twist on the dance off idea.  Dice Dance off

These last two suggestions do require more effort from everyone but hey, the best parties are the ones where people make it happen. If the planning and performance is put in by the guests, maybe a bit nicer prize is warranted…movie passes are always great prizes.  You can run any of these ideas as contests or as just performances but I think the contest idea makes a really good reason for the performances and brings out the best in the fun factor. Often the unexpected fun something can happen which is really the icing on the cake.

And there you have it. As a DJ, I have seen a lot parties and events of every kind. The best ones, the events where people talk about again and again, are the ones where an effort has been made to make the party unique, fun and memorable. That does take time, planning and a little work, but the results will be well worth it. Even if you just do one of the ideas that I have presented, you will be raising the bar and opening the party up to some being something that will be an entertaining and notable recollection of a great party.